I left a little piece of me behind ...

... in the States. I am so lucky to have been given the opportunity to be the chaperone for the students from school and proud to say that they were model students. I could not have asked to travel with a better group of teenagers - I love my job!!
I loved almost every minute of my three weeks there. I am still undecided about Los Angeles (no offence meant but over 4 hours of delays at airports and then the mother of all traffic jams at 11pm doesn't put me in a positive frame of mind) but I can definitely say that I fell head over heals in LOVE with San Francisco, closely followed by San Diego. I took so many pictures - as one does while travelling - and I am ashamed to admit that I have not sat down and taken the time to go through them properly. Between unpacking and starting work the day after I arrived home, there hasn't really been the time. Even now, I should be preparing lessons for tomorrow but I just HAD to share some pictures, just so I can prove that I was really there lol.
We spent all of our time in So Cal - San Francisco, Los Angeles and San Diego. The majority of our time was spent in SD (10 days) where we were hosted by students and teachers from Grossmont High (go Hillers!!!).
Our first stop was San Francisco - just 3 1/2 days and in my opinion wayyyyyyyyy too short. I have read so much about SF in books over the years and I was most excited about going there. The weather was cold, wet, windy and FOGGY (typical SF apparently) but who cares, its SF!!! The pictures below are of the Golden Gate (which I walked over), Alcatraz, Pier 39 and the Powell-Hyde Cable car (which we took up to the top of Lombard St so we could walk down the Crookedest Street).

Our next stop was LA for 5 days - did the obvious like Disneyland/California, Knotts Berry Farm, Santa Monica Pier, Rodeo Drive, Hollywood. My pick places in LA were Santa Monica Pier and being able to touch Hugh Jackman's hands out in front of the Chinese Theatre (no pic of me touching them though, just a pic of his 'spot' which I may share another day). 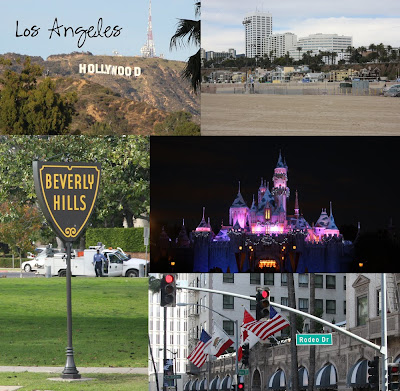 Our final stop was in San Diego. I didn't know a lot about SD before travelling (not one to research before going anywhere but rather just take it how it comes) and I have to admit that I was pleasantly surprised by what I found. The weather was gorgeous, particularly in the last 4 days of our stay and as demonstrated by the photo taken down at Pacific Beach Pier (how cool is that hotel, you can actually book a room ON the pier and sleep over the water!!). I loved, loved, LOVED the zoo and could have spent more time there. I was in awe of the US Midway - the amount of effort which has gone into creating the museum is phenomenal. Shamu the whale was awesome - didn't expect anything less and San Diego, your sunsets are spectacular. So add all of those days together, plus the travelling and that is how I spent the last three weeks of our summer vacation. 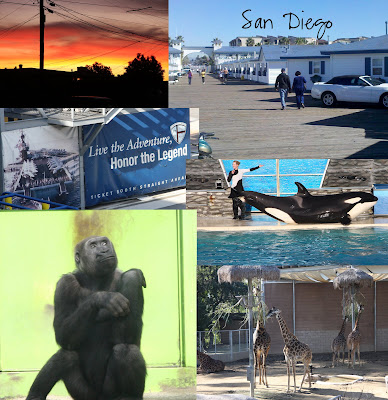 But now it is back to reality for me - school lunches, washing, ironing, planning lessons and getting settled back into the routine of every day life. Not so much as a hint of scrapbooking yet :( hopefully it will not be too much longer.
So now that the love fest is over, I will let you get back to your lives.
Thanks for visiting,
S xoxoxox
Posted by Sarah at 8:52 PM

Looks as though you really packed a lot into one trip! Glad you enjoyed it.