The boys and I spent last weekend all by ourselves here on the farm because Daddy had to head out to other farms (about 2 1/2 hours away) to do some spraying.
We had fun - we ate Nachos (something we don't eat if Daddy is going to be home for dinner), we played with Lego, Thomas and all the John Deere toys, we played Connect Four (a newly discovered passion of Lachie), we played on the Wii, we went to a birthday party, we mowed some of the lawn (only managed to get 1/3 of it done and I spent close to 3 1/2 hrs on the mower - first time parts of the yard have been mowed since the first lot of flooding the week before Christmas) and the boys spent hours in the sandpit. Their latest game involves seeing how deep they can bury their legs as well as all the toys. There was laughter, there was shouting, there were fights, but mostly there was fun. At the end of the day, the boys asked if I could take some photos of them. I got heaps of the 'burial chamber' but I love these ones the most: 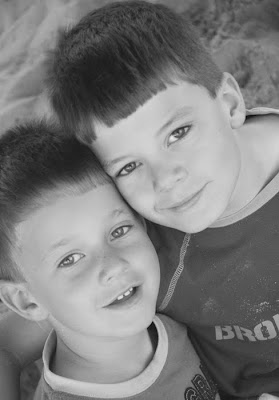 They look so sweet and innocent - looks can be VERY deceiving lol! 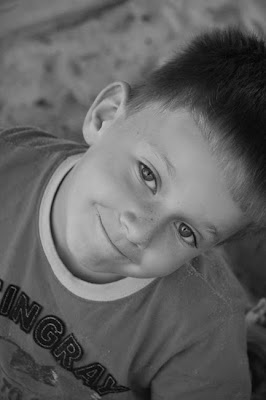 My littlest man is the cheekiest monkey. Never takes anything too seriously and happily told my mum that he was 'really enjoying his little vacation from Daddy.' Not sure where he got that idea from but it made Mum and I chuckle. 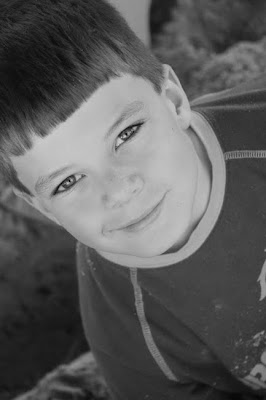 My biggest little man is growing and changing so much. He has the most extraordinary imagination. I love sitting behind the curtain in my bedroom (the closest room to the sandpit) and listening to him playing his games. I have no idea where he comes up with his games or schemes for doing things.
Finally, after the boys went to bed late on Sunday night, I played around in Photoshop a little bit and created this for my diary cover: 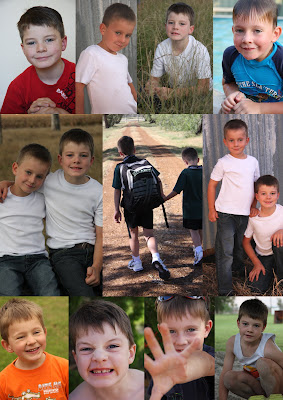 The collage is made up of a snapshot of photos taken during 2010. Sometimes it is hard to work full-time and I know that by choosing to work, I have missed out on some things with the kids but I look at these photos and realise that I haven't missed out on too much because there are soooooooooooooo many great memories to be found just there.
Still no scrapping :( as I am snowed under with planning and preparation. Hoping to cut the school work ties over the weekend and do a little something for me.
Cheers,
Sarah
Posted by Sarah at 9:08 PM

What handsome boys and great photos.

These are fabulous photos, and the collage is awesome! As for working, I worked full time until this year, and my kids understood why I worked, and I think they appreciate it! Congrats on being a working mom-truely the toughest job!

What wonderful photos of your boys!