Getting my Scrap on!!!

It was a long weekend for most of the states in Australia so I made the most of it by getting my scrap on. This was the first chance I had had to scrap since going on retreat a few weeks ago - always a pain when real life gets in the way of playing with cardstock, pretty paper, stickers, mist and paint so I made the most of it. I surprised myself by getting five layouts done - yeah not many for power scrappers but when I was washing, cooking, cleaning etc all weekend as well, you gotta be happy with that. 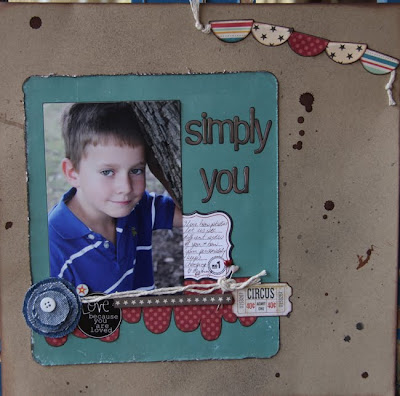 I actually started this layout at the retreat and was supposed to be a challenge where a page Scrapbooking Memories Magazine was selected and we all had to lift a particular LO on that page. Well long story short, I couldn't get into it so I put it away. When I pulled it out on Saturday afternoon, I pulled it to pieces and started from scratch and I am so much happier with the result.
I am feeling a bit of a theme happening with the next few layouts. Can you guess what it is??? Well actually there are two things happening. Let's see if you can guess both.
Layout 2: Winter Holidays 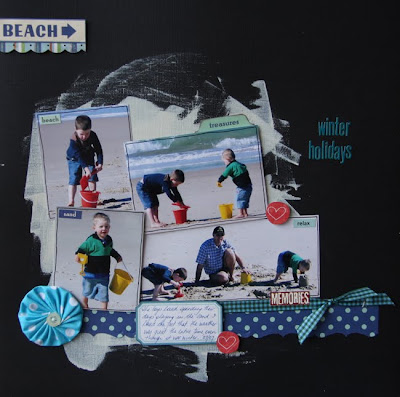 It sure feels good to scrap some older photographs as it is something that I don't normally do. These photos are from 2007 - wow the boys are so small. Can hardly believe how much they have grown. A really simply layout but I am happy with how it has turned out :-)

Layout 3: The Story of the Blue Chair 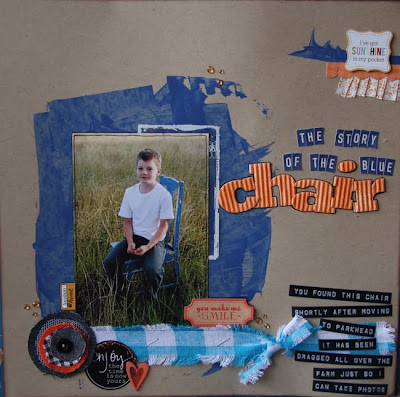 Can you see one of the patterns forming yet? Yep, ever since the retreat, I have been wanting to use paint. Who would have thought that I would ever scrap like this - sooooooooooo not me. Really stretched myself with paint and mist on the one layout lol!
Layout 4: Amazing 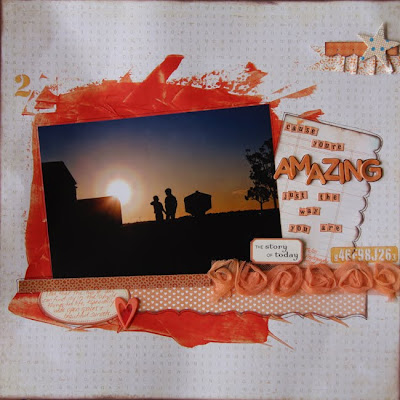 I love this photo in this layout. It was taken by Mel from Meloo Photography last year during a Point Shoot Play class last year. After the class finished, we all headed here to the farm for an impromptu photoshoot. I completed this LO as part of Renee's June Tune challenge over at Scrapbook Savvy. We had to incorporate something from Bruno Mars' song, 'Just the way you Are' and for an added challenge, the LO had to be done in monochromatic tones. I have lost count of how many times i have pulled this photo out to scrap but have never been able to get colours to gel. Although I had considered, and later dismissed orange a few times, I decided to give it another go and am stoked with the result. So have you guessed my two new favourites from the last few layouts yet??? Do the words paint and orange mean anything??? hehehehe 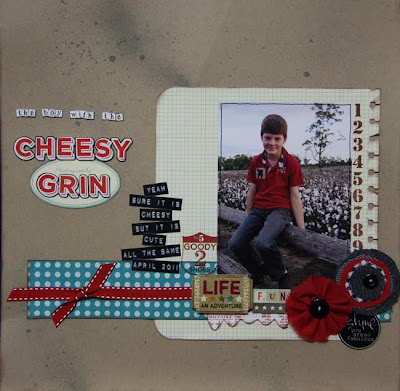 I am calling this layout my comedy of errors. Believe it or not it took me all day to do this layout? How is that possible you ask? Well take someone who fiddle-farts around, moving things from here to there only to move it back to its original place about a million times and it isn't hard to work out. So I had the layout completed and photographed and was in the process of editing when I realised that the title was spelt wrong. Then I realised that it wasn't just a matter of taking the extra letter off because I had already traced around the edges. So I carefully pulled it apart, misted another piece of cardstock and stuck everything down for the second time, of course making sure that I spelt the title right. So you would have thought that I would have learnt my lesson and stopped there but no I didn't. I just HAD to trace around the letters again. This time the pen slipped while I was tracing - grrrrrrrrrrrrrrr why didn't I stop?! Luckily the trusty October Afternoon (do you know I {heart} OA?!) came to my rescue. Note to self - stick with what you know, don't try anything fancy schmancy lol.
So that is my weekend of scrapping. Pretty chuffed to have more layouts done. That will probably be the last of it for the next two weeks - exam block starts this week which means LOADS of marking and report cards to write. I am determined to have everything done before we head off on holidays at the end of June. Wish me luck lol.
Thanks for stopping by.
S xoxo
Posted by Sarah at 8:38 PM

Wow what a fab selection of LOs love all the paint that you have used in many different ways in them - they are all gorgeous :)

Thanks for sharing your layouts! Gorgeous!

Great layouts. Each one has something different. I love how you used paint.

Congrats on completing so many layouts. I'm thrilled if I get 2 done in one weekend! :) These are great. I love the painted background. It's fun to dive a little out of your comfort zone once in awhile.

OMG! you did step out of your comfort zone! pmsl
and you certainly rocked them!