Scrap the Boys and some more

Somehow not only did February manage to pass me by but it appears most of March missed me as well. No real excuse for my absence apart from the fact that work has taken precedence lately. In almost 13 years of teaching, I cannot remember a more frantic start to the year; so much so that I feel like it is Week 9 Term 3 (for those of you in the teaching game, you will know that this is about the time we hit the proverbial wall). Everything in life, scrapping and housework included, has taken a seat waaaaaaaaaaaaaaaaaaaaaaaaaaaaaaay at the back of the bus while I have been manically organise camp for my 'babies' - cannot believe they are in Year 11 already - , trying to adjust to an entirely new behaviour management system, meeting and getting to know 30 new 'babies' and the general day-to-day stuff that is teaching. I have lucked out again this year with my classes and am even lucky enough to be teaching the lovely daughter of a very special scrap buddy. It is going to be a great year work wise - I can feel it in my bones lol.
Lachlan was not feeling well today so I stayed at home with him. After I finished catching up on all of the housework and organising classes for the week, I decided to reward myself with a touch of scrapping. To be honest, recently I began thinking of packing up my stuff and giving it away - partly because I felt no desire to scrap but also because with everything so chaotic any chance I did get time to scrap I sat there thinking about all the things I should have been doing instead of playing with paper. Finally catching up on all the jobs around the house as well as the pile of marking that has been haunting me for the last few weeks, was just the thing I needed to spark the flame again.
What better way to find the spark than the latest challenge over at Scrap the Boys. This month's challenge was to use the title 'Life is Good', the colour red somewhere on the layout and handwritten journalling. I based my layout on the latest sketch over at Get Picky (although I used one photo instead of two - whoops lol). Here is what I came up with: 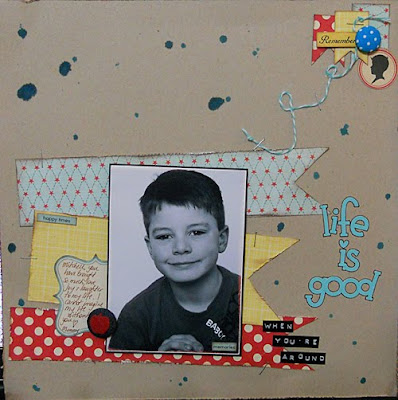 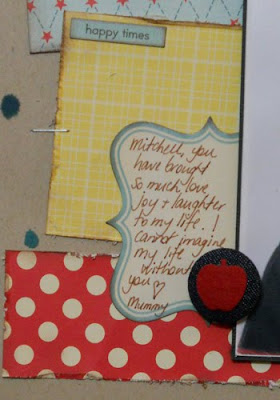 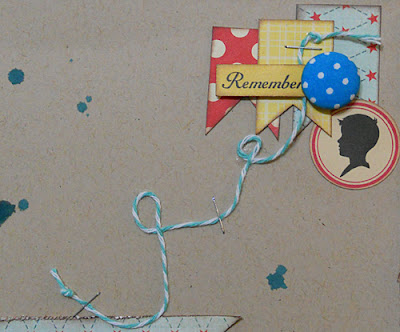 Not too shabby, even if I do say so myself, especially considering that I was ready to give it all away :o
The next layout was a work in progress for almost a month. It didn't turn out like I had it in my head but I am not too concerned about that because it the memory of what this layout represents far outweighs what the layout actually looks like (well I will keep telling myself that anyway). Lately, Lachie has taken to writing us love letters when he is in trouble for something. Cute I know, but I don't want him to get into the habit of thinking that all is forgotten if he writes us a letter. 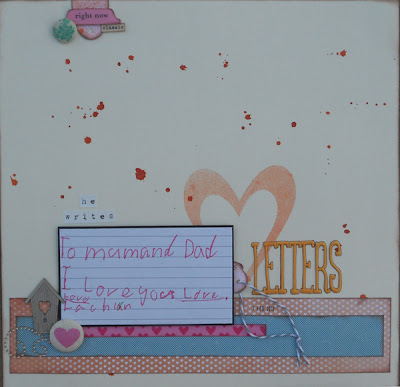 The next layout was supposed to be for a CyberCrop challenge over at Scrapbook Savvy in February but I just didn't get there. This is another one of those 'been sitting on my desk for ages' layouts. Totally loving the pink heart bird - found them at Typo at St Kilda in January. It was originally a paper clip but I pulled that off lol. The photo in this layout is one of my favourite photos from our time in Melbourne at the start of the year. It was taken in Hosier Lane - one of the painted/graffiti lanes in the CBD. 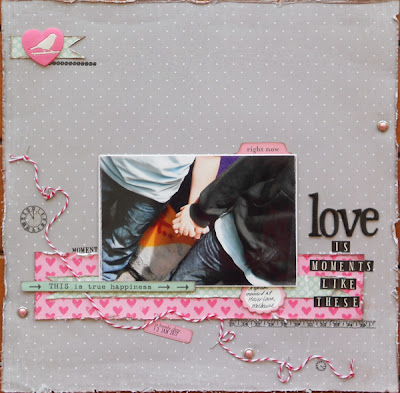 The final layout was one that I started way back in January while the boys and I were visiting Rebecca. It wasn't until I got home that I realised the title was spelt wrong. Of course, I didn't get around to fixing it until today. Better late than never I suppose lol. 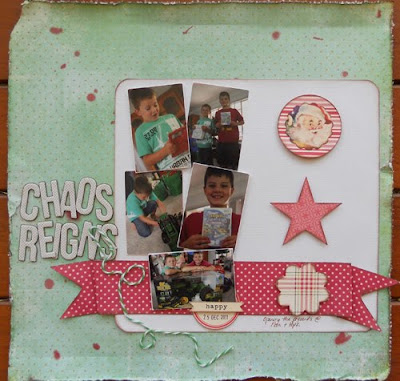 I am hoping now that I am feeling on top of things again, I can grab a little bit of time every week just to sit and play. Life is better all round if there is play time in there.
Thanks for stopping by.
S xoxoxoxo

Love the paint splats and the photo is too cute. I'm with you on the 'hit the wall' thing. Only 9 days of school left!! Thanks for playing along at STB!!!

Oh WOW!! What fabulous creations! Thanks so much for joining us at Get Picky! I love what you did with the sketch!