In many ways we have the best of both worlds when it comes to living on a farm.  The good stuff is that we are just a stone's throw from town, the boys LOVE farm life and Tony is left to his own devices 95% of the time.  For Tony, the down side is that this is not his own place; he manages it for a father/son team who have more properties further west from us.  I swear that man has wanted a farm of his own since the day he was born.  There is no denying that it gets him down at times but it doesn't stop him giving 150% all the time.  I try to lighten the mood by telling him that it is the perfect arrangement - he gets to spend all day every day doing what he loves and someone else pays the bills, but that doesn't cut the mustard for him.  Even at an age when most people are starting to consolidate what they have, Tony is forever plotting and planning how he can really call himself a man of the land.  While I can admit that owning a farm doesn't interest me in the slightest, I will do everything I can to help support him in his dream - after all, that is what a partnership is about.  This year, he was itching to get the cotton picking underway. This year he had planted over 4000 acres of dryland cotton so there was a lot riding on this crop. After a few hiccups and false-starts, he was finally able to get the picking underway. To say he was happy was an understatement. It was hard to tell who was more excited, Tony, Mitchell or Lachlan. 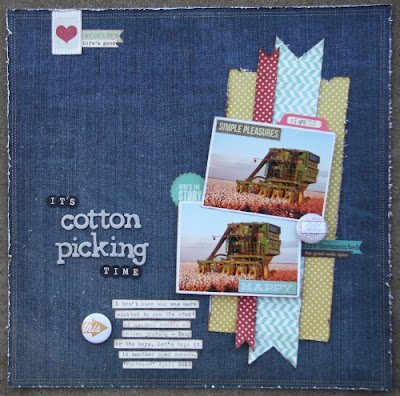 Have I told you lately how much I love my new {old} typewriter??? Lol, of course I have but I am going to tell you again ... I LOVE it! 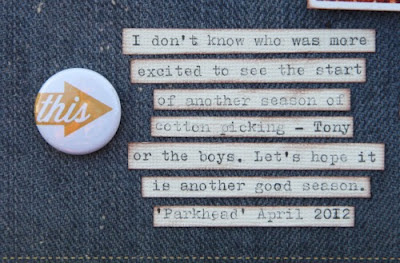 A close-up of the cotton pickers supplied by the contractors.  Old as the hills and it Tony all of his might to keep them in the paddock (not that it was his job to do, he just did it so the picking was done as fast as possible) for the entire picking season.  Hopefully if the seasons stay good, he might have his own picker to play with one of these days, courtesy of his boss that is.  Let's hope it will be in a better state than these ones were ;) 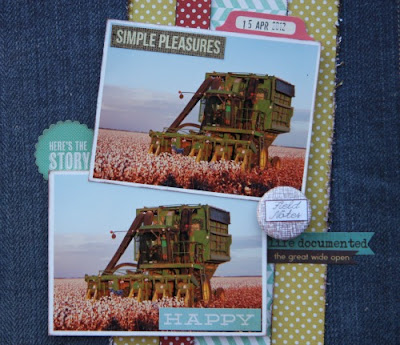 Til next time.
Take care
S xoxoxo
Posted by Sarah at 10:18 PM

Love this!!! Good choice of colors.

Gorgeous photos! My husband has the same dream!

Great page! Love the backgound paper you used and the design of layout!!

and NO cardstock again! I think you might just be converted!
And gosh those pickers are ancient! fingers crossed Tony gets one to play with soon