A Great Day to be Alive

Yes indeed, today is most definitely a great day to be alive. Today we are living history and as a history teacher, this excites me more than anything - well almost more than anything - I think chocolate still takes the cake hehehe.
Now, those of you who have sat in my history classes or those of you who know the way I think, I have not been a fan of the American Government for a number of years now. I have disagreed with the way the have taken it upon themselves to be the 'world's police' and the way they have pushed that their way is the only way. But I honestly believe that we are seeing a new America emerge today - and I hope that this does indeed prove to be true over the coming years. We are witnessing before scenes that have never before been witnessed in that country. Whether you are a democrat or a republican or a 'who gives a shit about politics', it is hard not to be affected by today. It is a time for change, it is a time for hope, it is time to live history. 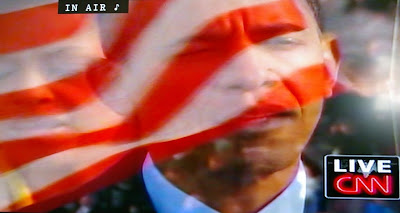 Like him or loathe him Barack Obama is a man who has changed the face of American - and world - history forever. It is hard to conceive that today he stood as The President of the United States of America in the same spot as African-American slaves stood as they were building the White House all those years ago. It is hard to conceive that he is LIVING the DREAM that Martin Luther King spoke so strongly about all those years ago in almost the same spot. I wonder, if MLK were alive today, what would he be thinking???
Yes times have changed, but have the thoughts and prejudicies of people not only in America, but around the entire world, changed enough to realise the enormity of this moment??? Will they put aside their personal thoughts and beliefs (no matter how warped or distorted they may seem to the rest of us) to allow Obama the chance to live out the dream that so many people died fighting for. I hope that they do and I hope that Barack Obama is allowed to see through his entire term in Office - if not two more.
I loved this his speech - he has an eloquence about him that cannot be described. I could sit and listen to him speak for hours. I especially loved this part:
This is the meaning of our liberty and our creed - why men and women and children of every race and every faith can join in celebration across this magnificent mall, and why a man whose father less than sixty years ago might not have been served at a local restaurant can now stand before you to take a most sacred oath.
Yes, this IS history and I cannot believe that I am able to live it! This is how far the America - and the world - has come but let us not forget, how much further we have to go.
Me xoxoxo
Posted by Sarah at 10:37 AM