Phew, what a week this has been. Feel like I have been put through the spin cycle on my washing machine about a dozen times (and still counting).
We have had one sick boy and another 'cough cough I sick and no mummy i not 'tending (pretending)' boy in the house this week. For a while there I thought the dreaded swine flu but thankfully it isn't - just another viral thing that results in high temps and joint stiffness - in Mitchell's case, his head/neck which he hasn't been able to move properly all week. Tuesday-Thursday were the worst but by late Thursday he was slowly starting to get some movement back which was very relieving I tell you.
Mind you, that didn't slow him down at all - I had a battle royale trying to get him to stay in bed and rest like the doctor ordered. Even bribing with the good old "mummy will set a matress up for you in the lounge room so you can watch ABC Kids and movies' didn't work. All he wanted to was be outside riding on his bike and being over at the shed helping out Daddy. I finally caved in and I have a much happier boy on my hands.
Seeing as I couldn't go to work for most of the week, I made the most of it getting truck loads of washing and folding done (housework sucks more than words can say but yay it is done). Even better than having wardrobes full of clean clothes is the fact that I got to scrap (weeeeeeeeeee heeeeeeeeeeeeeeeeeeeeeeeeeee she squeals lol). When it became clear that my little mate wasn't going to rest, I set up a portable table in my scraproom/office and set him up with some school work his teacher organised for me (the horrible mother (as well as the teacher in me) that I am couldn't let work slip by even for just a few days) and we both pottered away for ages. I love how Mitch is so excited about school and he loves learning new things and to be honest, I think he felt kind of important having 'proper' school work to do as he called it. Silly me was too busy scrapping to get pics (doh silly me) but I did manage to create these: 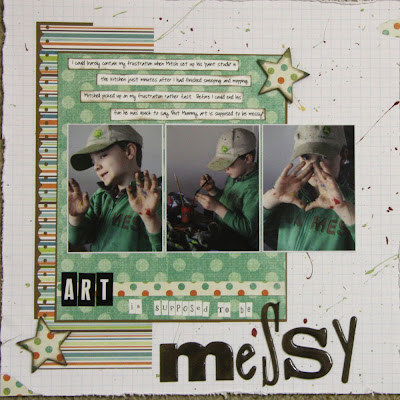 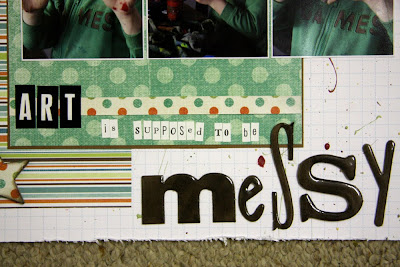 It feels like it has been a long time since I scrapped a LO with multiple pics, but in preparation for some upcoming challenges some people are going to be giving me, I thought I would get in some practise. I love these pictures of Mitchell, although at the time I was one VERY MAD mummy seeing the mess he had created but he soon had me laughing when he told me very innocently that 'art is SUPPOSED to be messy'! Kids. 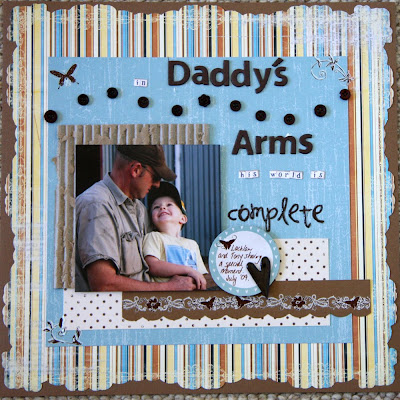 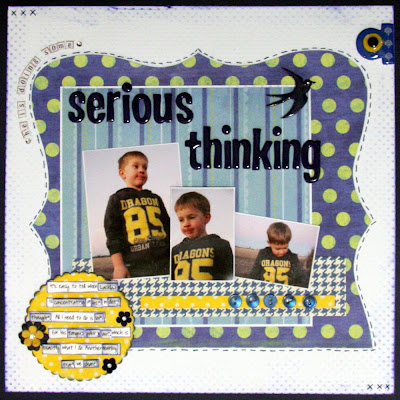 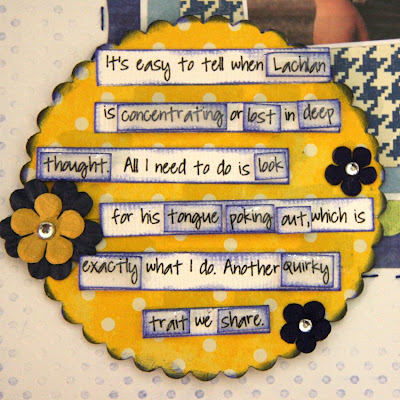 I couldn't resist scrapping these pictures of Lachie with his tongue poked out and the fact that it is something that I do as well. It must be a family trait because I have an uncle and cousins who do the 'tongue thing' when we are concentrating or thinking about something.
So that is the week that was - not a huge amount of scrapping by a lot of people's standards but I am chuffed to have been able to get that much done considering how slow I scrap - isn't that right girls lol.
Have a great weekend everyone,
Me xoxoxoxo
Posted by Sarah at 9:36 PM