It's all in the Undies

... apparently ...
Well it is according to my 7 year old. No matter what I tried, there was no convincing him to put some shorts on when I wanted to take some happy snaps. Silly me for finally deciding that last Sunday HAD to be the day that I finally got around to taking pics of the boys with what I think is the most awesome chair (peeling paint makes it even more awesome IMO!). The chair (well chairs to be exact because they are two) lives in the boys cubbyhouse and was here when we moved in. As soon as I saw their peeling paint, I need I had to take pictures with them, but life continually got in the way and I kept putting it off.
Until last weekend that is .... last weekend the boys decided that they needed to pull the chairs out of the cubbyhouse and literally throw them down to the sandpit to play one of their games. They were having such a good time that I just knew I had to get out there and take pics but by the time I got out there, one of the chairs had fallen apart and the other one was very much worse for wear so I snapped as many pics as I could. The problem was that Mitch point-blank REFUSED to put any shorts on - he saw nothing wrong with just getting around in his undies. Me on the other hand, thought that wasn't such a great idea but hey, when he is willing to sit and smile nicely, who am I to argue??!!
So this weekend, it was my chance for payback - definitely something to make sure goes into the album for his 21st birthday. 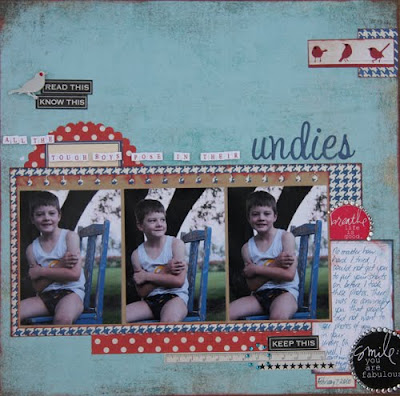 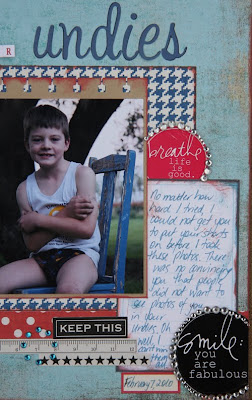 ........ isn't karma a great thing when you are a mother lol hehehehehehehehehehe.
That's all the showntell I have for now, think I am coming down with a head cold or something, trying hard to fight it like crazy.
Til next time, thanks for stopping by,
Sarah xoxoxoxo
Posted by Sarah at 4:05 PM