One update closer to 100 posts

I didn't realise how many posts I had written on here until just now. Wow 92 entries of blabberings from me.
Not a lot to report from here - had a fantastic weekend. My sister and brother-in-law came for a visit to see Mitch play his final game of cricket for the season. Unfortunately, with all the wet weather last week, their game was cancelled. Not to worry, we all ventured down to the Coffee Club for a late brunch - delish, delish, delish.
The rest of the weekend was spent doing lots of talking, laughing and joking. I have to let you in on a little secret - after 1o years, I love love love having a brother-in-law who is awesome, fantastic and an all-around good guy. I am so glad my sister has someone like him in her life. After they left yesterday afternoon, I started working on a layout which I managed to finish late last night. It's very basic and is a lift of something I found on 2peas but as soon as I saw it, I knew it would have to have a home in the family album: 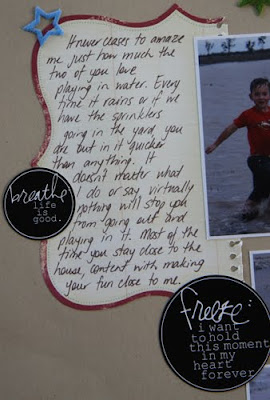 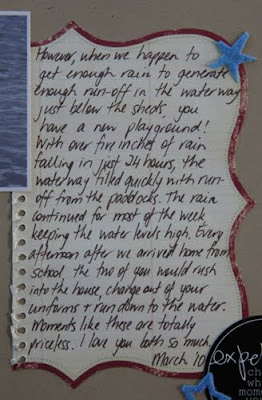 And next a few pictures, just because LOL. I went into my bedroom at about 10.30 last night to grab something and found this, Mitch sound asleep, fully dressed for school (bar the shoes of course). And yes, he does sleep like that - quite often too. Could not resist taking these pictures of him. Talking about being super-organised for the day ahead hehehehe 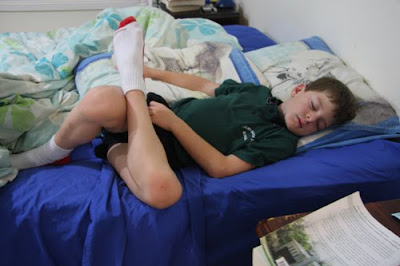 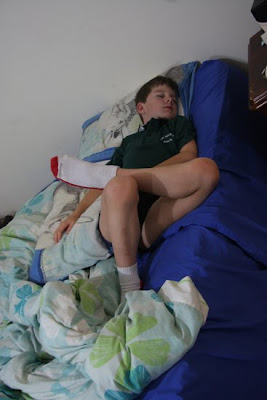 Gotta love how kids' minds work. Nothing else to report. Busy week ahead of me, a truck load of marking to do and organising for Term 2 to get started on while I am on LSL.
Hope to catch you later in the week or over the weekend.
Me xoxo