Some blasts from the past

Last weekend was spent in a marking and scrapping frenzy. Knowing that I am taking Long Service Leave for Term Two, I am determined to leave no job left undone so last weekend was all about tying up the lose ends. In the past three weeks I have marked more than 75 short stories (yep more than 75) - oh the joys of having three lots of English classes all doing similar units at exactly the same time!! I finally got them finished on Saturday after two weeks of torture lol.
So what was the reward for all that hard (mind-numbing at times) work??? SCRAPPING. Tsk tsk, need you ask???!!!
After successfully completing the marking, I set myself a new challenge - to scrap a picture that has been sitting in my photo box for 5 years. I have lost count of how many times I have pulled the photo out, only to put it away again (well duh obviously coz it was still unscrapped). The background was always my stumbling block so I cut it back (was originally 8x10) to get rid of as much of the distraction as possible. This is the result, and have to say I like it: 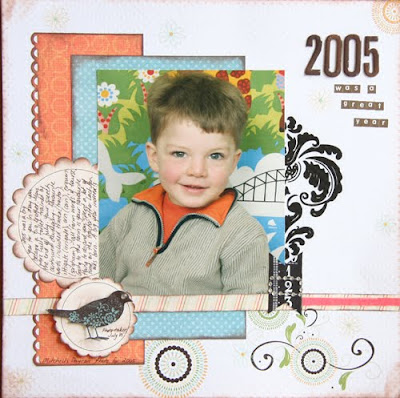 Layout number two was another series of photos that have been tucked away, admitedly not as long as the previous one - only three years. Have scrapped the picture of both boys together a few times (mainly because so many came with the set I ordered) but have never taken this approach with it - a reflective type LO: 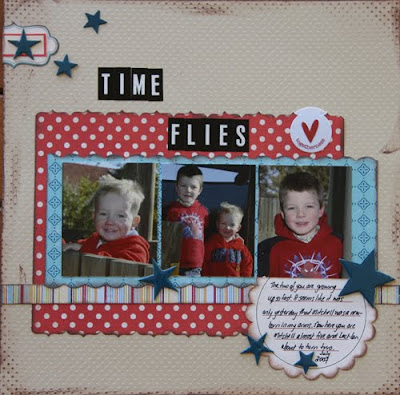 Then it was onto Lachie's Daycare group photos from last year. Not loving this but oh well, can't win them all I guess: 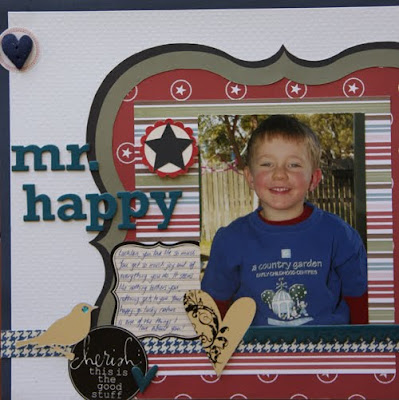 Next was another LO of Lachie using another one of my favourites from our family photo day last October: 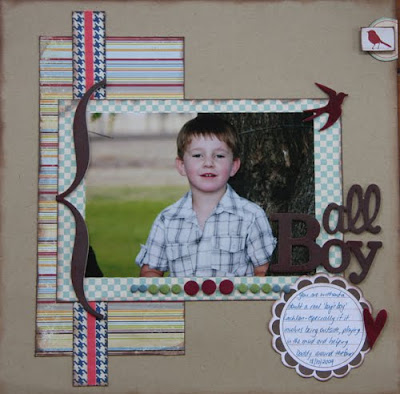 And finally, this is my attempt at the latest sketch from Inspired Blueprints. Didn't stick to the sketch very well though: 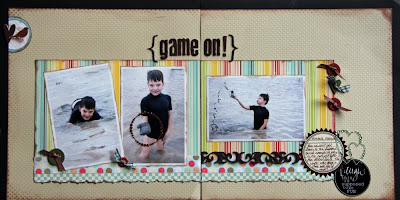 Not a bad weekend's effort I don't think, even if I do say myself lol. Everyone is counting down the days until holidays - only 6 days of school left (or 24 lessons), not that I am counting (much hehehehehe). So much still to do so I had better get to it.
Thanks for visiting.
Sarah xoxoxo
Posted by Sarah at 7:35 PM

Great weekends effort! I love the LO's.. I have a little girl so am always inspired by boy LO's. I love the colour combos you use and you certainly have some cute scrap subject s:)