Operation Casts Off a huge success

**** WARNING: GROSS PICTURES AHEAD!!! ****
Yesterday was a big day for our biggest boy. After 8 weeks of discomfort, broken sleep, putting up with being asked dozens of questions every day, Mitch had his second lot of casts taken off. This time he was awake for the procedure - last time he was already under the anesthetic when the doctor took them off. Mitch asked if I would take some photos so that he could take them to school to show his classmates and, of course, the scrapper in me just had to oblige with this request lol.
It was interesting to watch the casts being taken off. The saw wasn't overly loud and it hardly took any time at all to make the cuts. Mitch was a little unsure at first, was worried that the blade might cut his leg, however, it didn't take him long to get entralled in the process. 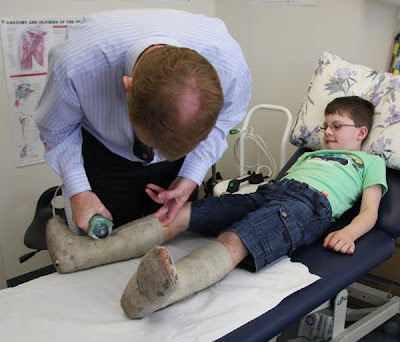 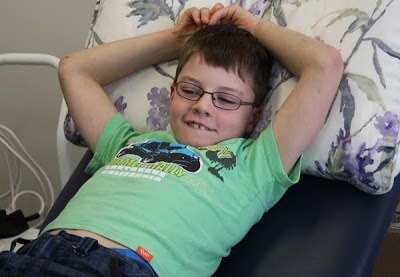 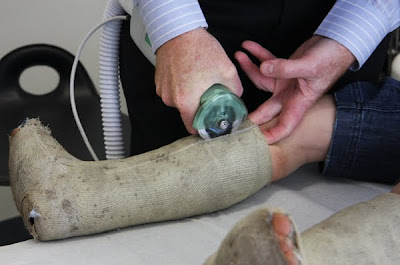 Once all the cuts were made, the doctor asked Lachlan if he would like to help - apparently he had to do the VERY (lol Lachie's word) important of pressing down on the plier thingies to prise the cuts apart. By the look of the tounge in the second photo, he was putting a lot of effort into it. And oh boy, what a surprise to peel the casts back to reveal one dirty and VERY (my word) smelly leg. 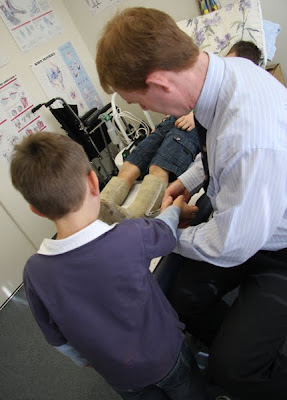 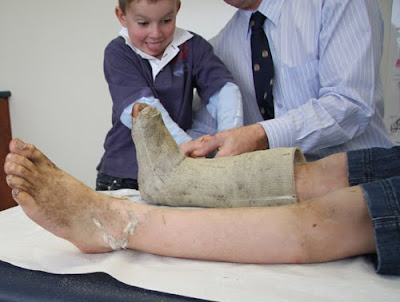 Hehehehehehe just in case the previous photo wasn't gross enough, here is a close up of the feet. All I can say is thank goodness for whoever invented Glen 20 (in my eyes, and to my nose, you are a God) because it was rank!!! 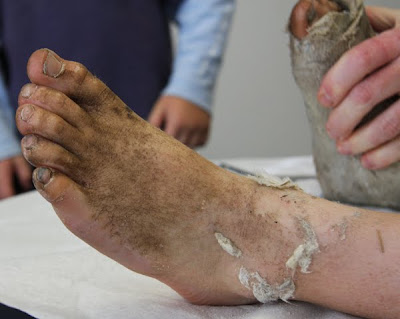 And if all that wasn't gross enough, there was one more little surprise in one of the casts. We have no idea how it would have managed to get wedged where it did bit on the top of one of Mitchell's ankle was a sorghum seed. Yep a sorghum seed. And wedged it was - so wedged that it had rubbed against the skin that much, it broke the skin. Fortunately enough, the seed didn't shoot (as in sprout), although it was just starting to spilt. If the same casts were on for the entire 8 weeks, it definitely would have shot which could have been bad news but luckily it didn't. He has a tiny infection from where it was wedged but it appears to be healing ok.
The verdict??? Well at this stage, it appears as if the procedure has been a huge success. Mitch has a lot more flexibility in his lower leg/ankle area and can now get his feet to right angle with his legs. And the best bit??? Yep, you guessed it, he is walking on his feet AND staying on them. We haven't seen him take more than a small handful of steps on his feet for the last 4 1/2 - 5 years. So in my book, that is a total success, so much so that the specialist thinks he shouldn't need any physiotherapy or special exercises!!! Here's hoping the success will continue.
So on that happy note, I am not going to give one giveaway from the previous post, but THREE. Yep, I am giving a little package of love to the three lovely people who left comments on the last post. So Chris and Sarah Lou, check your emails and Media, if you read this, please email me so I can organise a little package of love for you too!!
Have a scrappin' good weekend everyone.
Me xoxoxox
Posted by Sarah at 7:54 PM

Thank you for the goodness email!!! made my day!
I remember horrid feet after casts, I was horrified at the smell!!!
How did teh showing of the classmates go?????