She Scraps / He Scraps

The boys have always had an interest in the layouts I create for them but it is rare that they actually want to sit and shuffle papers with Mummy.  On one of my scrapping nights while on holidays, I had a little scrap buddy join me at the table. Lachie was keen to scrap, as was I, so who was I to disappoint him??!!

﻿Layout 1: One Cool Dude ... literally.  The biggest downside to holidays at the beach during the winter months is the cold but the boys were still totally keen to hit the surf.  Lachie had a ball running and and out of the water to tell me how freezing it was.  This layout has a real 'Lauren Bell' feel to it I think with the strips of patterned papers and washi tape.  I am quite pleased with how it turned out. The button flair, journal spot and linen tag are all from the great folks at Ormolu.
Layout 2 features a picture that I have blogged about a few posts ago, although this time, there I have not process the photo anywhere near as much as the first ;)  I have used a sketch from Pinterest but again, can't remember which site.  I really must take better note of my pins lol. 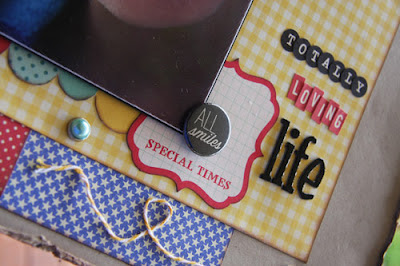 Layout 3 - Lachie's first layout.  He chose his papers, told me how he wanted them all cut and very firmly informed me that 'he would stick them where he wanted'.  Funny how he went for a very similar design to what I would have done.  Apart from cutting the papers to his instructions, the only thing I did for him was mist the cardstock and stick the twine down for him. 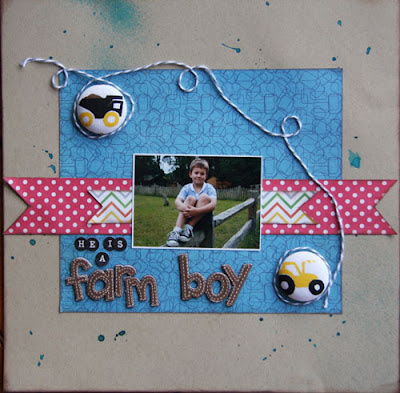 Layout 4 - Lachie's second layout.  For this one, he wanted no help at all.  He told me that he knew how to scrapbook and I could just do my own thing (cheeky little brat lol) ... that is until he needed me to stick down the twine.  That kid is such a dag at times but I love him to bits. 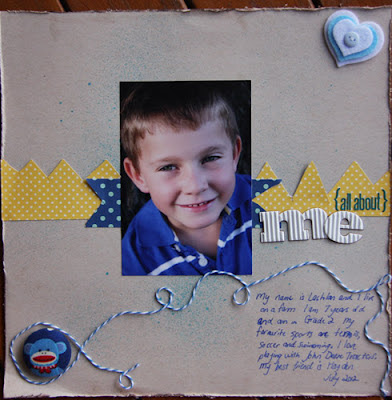 I'm not sure if Lachie will scrap with me again any time soon. As soon as he had finished both layouts he was all 'yep been there, done that'.  Oh well, at least I won't have to share my scrap stash lol.
Off to scrap with some of my friends tomorrow which will be great as we haven't got together as a group for a few months.
Take care
S xoxoxo
Posted by Sarah at 10:41 PM

yay! I can't wait to get my scrap on today.
I love Lachie's layouts.. you MUST sub them to SBM!
D x