... our oldest boy, Mitchell.  In a few months he will be 10 - OMG how did that happen??? He was just a babe in arms yesterday?! He is definitely his mother's child in the sense that he has inherited so many of my quirks and mannerisms.  Sometimes it scares me to see how similar our personalities are and i fear that when the dreaded teen years hit, he and I are in for some rough times. I just hope I can steer him through life and teach him how to cope with the rough times.  I love him to bits, even if I struggle to show him at times.

Layout One - Player of the Week.
This year is Mitch's second season of playing soccer.  Most of the players on his team over the last two years have been playing upwards of four or five years.  It took him a while to catch onto the game and he still struggles with his positioning at times but he LOVES it.  His coach often likens him to the Energiser Bunny because he just keeps running and running all game long.  It has been great to see how far his skill level has improved from his first game last year to the point of being awarded Player of the Week. We are so proud of him for never giving up and always trying his best. 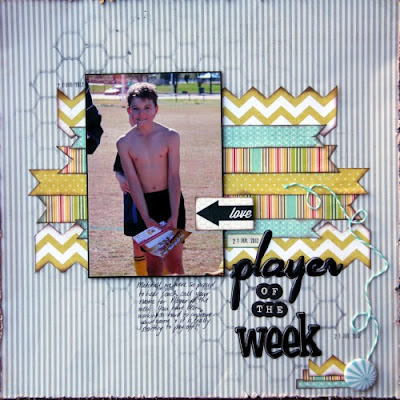 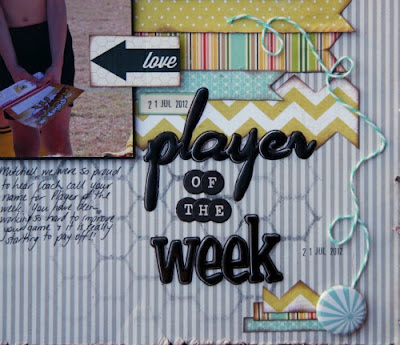 Layout Two: He Loves School
We are lucky as parents to have children who honestly love going to school, especially Mitchell.  He is keen to learn new things and loves to tell me all about his day when we are driving home of an afternoon.  I hope he is still this keen to go to school in a few years time ;) 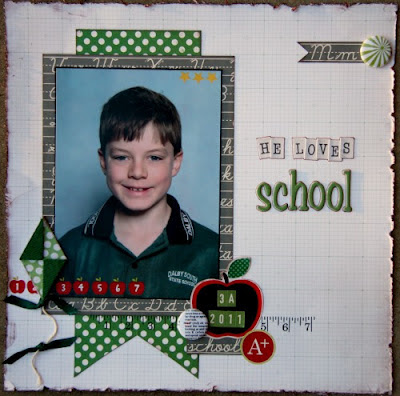 A closeup of some of the yummies on the page: 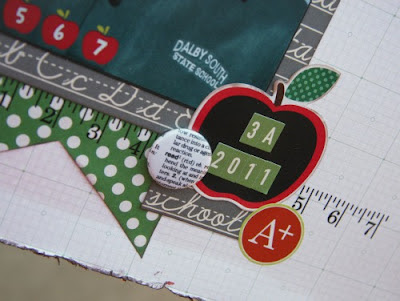 Wow, just realised that I have posted three layouts in a row that have not used Kraft or white cardstock for the background - lol I surprise myself sometimes hehehehehehe
No other shares for me tonight.
Take care
S xoxoxo
Posted by Sarah at 10:50 PM

Both fabulous layouts!!
My son just turned ten in May and we are so much alike as well.
I have the same thoughts on what it will be like when he is a teen :)

love both of your layouts. I have a teen and it's a fun age... Most of the time. lol Thanks for sharing.

Love that school layout, the grid paper instead of just cs gives it a nice texture, something I need to do a bit more often... :-)

I love your layouts-everything is tied together so nicely-just so cool.
I get so much inspiration from your work!

are you feeling alright???? no Cardstock? I didn't even notice that the other night when you created the 'player of the week one'!
Love them both
D xx

Two really nice layouts! thanks for sharing them!

Wow! Love them both! Love the hexagon mask on the top one!! Nice work