... did I ever dream that I would grow up to be a Soccer Mum. Don't get me wrong, there is nothing wrong with the sport but I have never had anything to do with it. I grew up in a house where rugby league was the only winter sport that mattered so I always assumed that if and when I had boys, they would play league too. Well they have proved me wrong with both Mitch and Lachie starting soccer fixtures last Saturday. In some ways it was perfect timing because there was a Cyber Crop over at Scrapbook Savvy on the weekend. What better way to get into the mood for scrapping with a freshly printed picture. The theme for the weekend was Stashbuster which meant that all of the challenges were designed to help us use up some of the older items in our stash. I have yet to complete all the challenges but this is what I have come up with so far. The first challenge I attempted was Anthea's. In this challenge we had to create a LO using products released before 2010, no cardstock and one handmade embellishment. I will admit that this put me out of my comfort zone in the sense that I rarely create a layout that doesn't have cardstock as the base. That being said, I found some papers in my stash dating back to 2007 - unusual for me considering I have fairly frequent cleanouts of my papers and anything old usually gets donated. All of these papers come from Fancy Pant's 'Papa' Collection. My handmade embellishment was the spiral flower and the banner. Not sure what to think of it it be honest, I find the base too distracting lol. 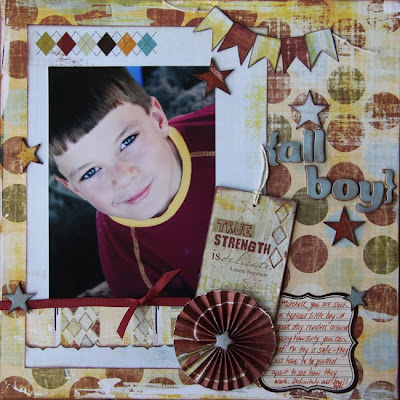 The second challenge I attempted was Sar's Blind Scrap. I was late getting started so had to substitute Glimmermist for the paint. Thinking I should have gone for a white or off-white base instead of the Kraft base I chose. 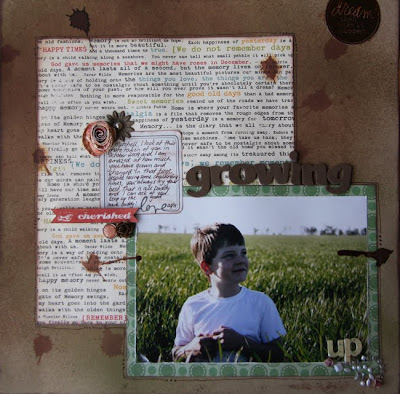 The third challenge I attempted was Kerryn's and I haven't quite finished it yet. For this challenge we had to create a lo using papers from at least three manufacturers (all of which had to be released Summer 2010 or earlier), two different colours of cardstock and a hand-made embellishment. As soon as I saw the colours of Lachlan's soccer jersey, I knew this was the perfect chance to use some up some of my old Bazzill colours. I think this will be the first of many soccer layouts but for a change, this one is for me: 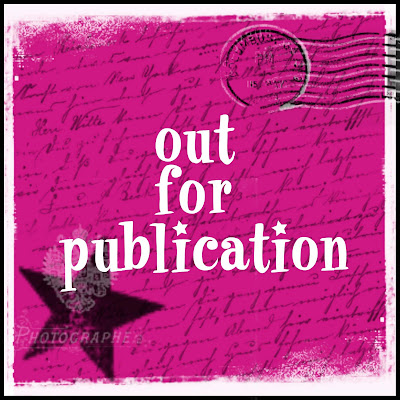 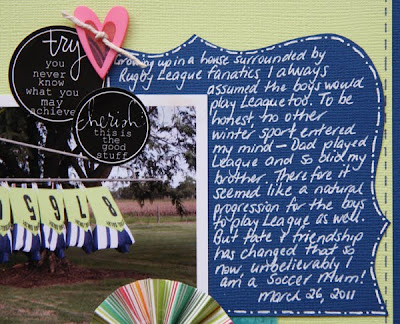 The second part of the challenge is to create a card using the scraps we have left over from the layout. WTF???!!! Me making a card????!!!! Cards are soooooooooooo not my thing. Oh well, I had better go try my hand at cardmaking lol. The challenges are open until Thursday so why not head on over to Scrapbook Savvy and give them a go. Take care S xoxoxo

Your layouts are all fantastic! I love that you used your stash and they turned out great! I think the kraft cardstock works well and the pattern paper in the first one really isn't too much, it works!

Oh what wonderful layouts, all of them! Kudos to you for using "older stash". I have plenty of purges ,too, but just can't seem to part with some of my older papers because I can always use them regardless of the year!

Awesome layouts! Did you ever make the card? LOL. Good luck. They really are quick and easy. :)

Both of those layouts are AWESOME!! I just love the colors on the first one!

Totally love your layouts! LOL on the soccer mum thing as I am a US soccer mom! Thought I'd have a football guy but soccer it is!!! great job all around! Thanks for sharing!