It is that time of the week again so that must mean it is time for a scrapbooking update. It has been a relatively productive weekend, though I am totally uninspired by what I have created. All of the layouts have the feeling of 'sameness' to me - same large block of patterned paper, same plain and simple style, same, same, same.
In layouts 1 and 2 I used photos from 2009 - the last time we grew wheat on the farm. I paid someone to come and take photos of us as a family with the instructions of 'natural, informal photos'. The results were mostly dismal. While she managed to take random shots of the boys as they played which were totally gorgeous, the rest were ugly as sin. Not one of them is usable. We all look like statues with sticks shoved up our butts. Needless to say, I cried a lot when I received them. Ever since then I have been on the hunt for a photographer who isn't going to rob us blind and actually let us have access to all of the photos without having to pay a small fortune for a 6x4 shot. That being said, I do love the pictures of the boys and have scrapped them a lot.
Layout One is of Lachlan - my little farmer. I don't know whether there is any hope of him doing anything else in life except farming (but sure as heck I will try to convince him to do something else before going onto the land lol) - it is his first love, hence the inspiration for the title: 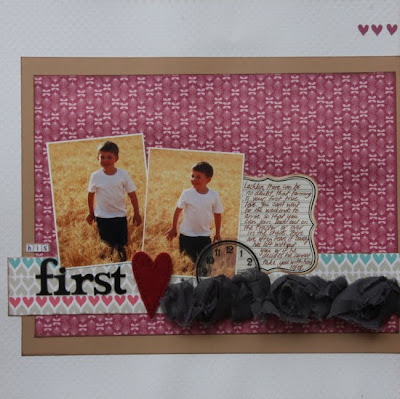 The photo I used in Layout 2 makes me laugh every time I see it. It is so typical of our every day lives - Lachie always struggling to keep up with Mitch in so many ways. It was supposed to be based on the latest Stuck Sketch but somehow I managed to get all the elements in the wrong places lol :o 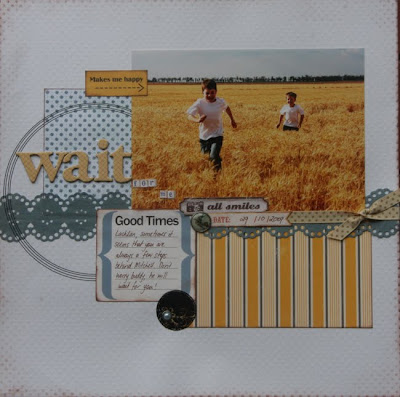 Layout number 3 is one that I am feeling a bit ho-hum about. I took Sar's March Random Kit challenge from the Scrapbook Savvy forum. The challenge asks scrappers to create a layout using one of the March Savvy Kits, fussy cutting, staples and two label stickers included in the kits. I have used the We're Savvy Kit (which has already sold out - just shows you how popular the Savvy Kits are!) to create my layout. I loved the products in the kit, just feeling a bit blah about the end product (hence my earlier comment about everything being the same, same, same): 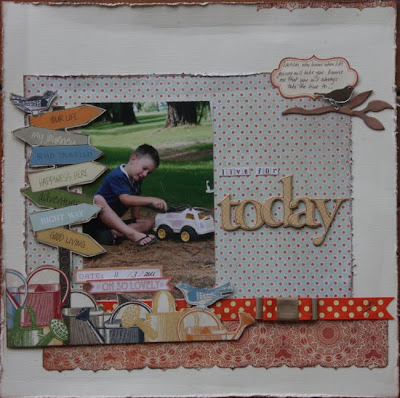 The fussy cutting was around the sign post and watering cans - paper from Webster's Pages Spring Market Papers. Not sure if you can tell what the original looked like from the picture below but it might give you an idea: 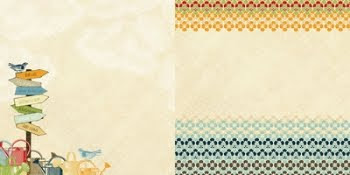 My final layout is my least favourite of the weekend and comes complete with button and bling chunder (what happens when you throw a heap of buttons and bling/pearls onto a layout). It was also my first attempt at making paper roses - another miss there too I think lol. I love this photo of Mitchell, it is his thinking face. You can tell that he is deep in thought whenever he sucks in his bottom lip - a regular occurrence in our house. That kid would have to be one of the deepest thinkers I know - hmmmmmmmm wonder where he gets that from :o lol 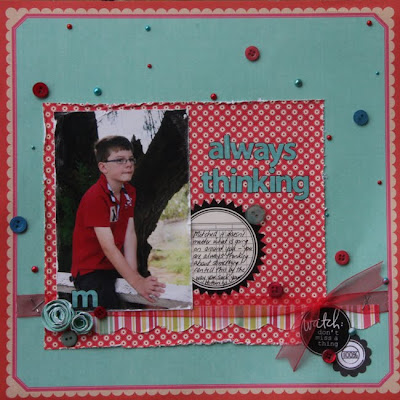 Not a lot else to report from the week. The boys were supposed to start soccer yesterday but it was cancelled due to the wet weather. By the looks of media releases, there has been mild flooding in town yet again. Hopefully the worst of this low has passed and the water will get away relatively quickly. On the positive side of things, the Condamine River is not in flood at the moment so the water from town should get away fairly quickly. You know you have problems when the Condamine and Myall Creek flood at the same time - a fact we learnt all too well in the floods of December and January.
Sadly, we also said goodbye to our beloved Charlie Cat on Thursday. I bought him almost 12 months ago (May 1999 to be exact) and in that time he became a much-loved member of the family. I have lost count of how many winter nights were made tolerable because of the fact that Charlie used to lie on my feet in bed and warm them up. He was my constant bed partner whenever Tony was out spraying or planting through the night. Charlie seemed to have a sixth sense for knowing when Tony wasn't going to be home lol. It was a shock to find out that he was so sick. We knew that he wasn't well - the lack of eating and sudden weight loss helped us to that conclusion - but I never expected to have to decided whether to put him to sleep or not. In my head, he was just going for his check-up at the Vet, but by that afternoon, I was having to decide what to do. It might seem like the callous thing to do by not trying to see how he went with medicine but he was suffering and my one rule with all of our pets have been is that the minute we know they are suffering, then that is the time to ease their pain. Needless to say, ours was a house filled with tears for most of the night and next morning. Oh well, at least he isn't in pain anymore, not matter how much it hurts for us right now.
Anyway, I have prattled on enough for now. I should let you get back to doing better things like scrapping lol.
Thanks for stopping by
S xoxoxo
Posted by Sarah at 1:12 PM

Well, this is funny. I JUST posted on my blog about how much trouble I have creating one-photo layouts! I love these, and really like your style. I am scraplifting that second layout, pronto. I especially like how you used the punched border on that page.

Your layouts are fantastic. I am sorry you had to say goodbye to your cat, it is always hard.

These are just beautiful.
Focuses on the photo's and the subject. Just lovely.
Love those photo's in the field, stunning.

posted before I finished.
So sorry about your cat. So sad.
That is a hard decision to make. I know as we had to put hubby childhood cat down, many years ago. But the poor guy was crying out in pain.
Are cat, Rose has been with us for 14 years now.
You made the right choice. Hugs to you and your family.

Love the photos in the "Wait for Me" layout!! Terrific layouts, all of them.

Ohhhhh Charlie Cat, Hugs and much love to you, I know how big a part he played for so long. You do realise that there was no way I was ever going to shoo him off my lap when he chose to lay there, I was too scared to..XXXXX
And your LO's scream 'Miss' they are exactly what you do so well, your signature pieces.