And the scrapping with friends continues ....

I don't know about you but I have just had the most awesome weekend full of fun, laughter, chocolate and scrapping. What more could a girl want??? Absolutely nothing when you are sitting at a table with Donna, Lisa and Lauren. OMG words cannot begin to describe just how hilarious these three ladies are and how we could make anything seem funny regardless of the subject. Unlike the other three I did not manage to get a lot of scrapping done - too busy laughing at the loud noises coming from a certain someone (lol wonder who that was? hehe) and wiping the drool off my mouth after looking at all the awesomeness being created around me. I tell ya, saying that these three ladies are talented scrappers does not go anywhere near to tell you just how amazing their work is. I am in serious lust lol. In between all of the laughing I managed to finish two layouts and start a third (which was finished just a little while ago): 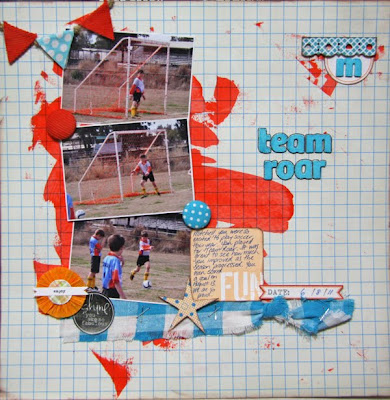 After doing a few pages of Lachlan's soccer efforts for 2011, I thought it was about time I did a page for Mitchell. The photos are quite grainy but I wanted to use them anyway as this was the first time he played 'goalie'. He was so excited and proud to finally don that jersey after waiting all season. He played an awesome half and did not let a single kick in - what a little champ. 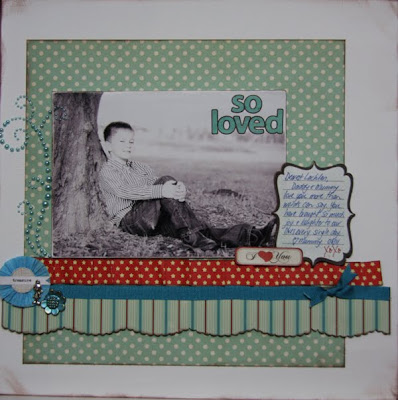 This is yet another picture from our family photo shoot. I call this the fake smile photo but Donna had a better idea with 'The Farmer wants a Wife' lol - can so totally see Lachie being on that show in 20 years time little heart breaker that he is. Quite a plain layout but this was how I wanted and even managed to use the little gifts Lisa passed my way. Thanks Lisa, mwah. 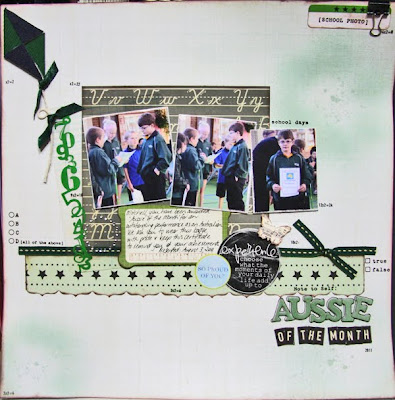 Another layout of Mitchell's amazing achievement in being award Aussie of the Month. I really struggled with this layout last night - could not get anything to work. In the end I gave up and packed it all away. Earlier tonight, I pulled it out and it seemed to come together in the blink of an eye. Think I channeled a bit of Lauren in the staggered placement of the letters and a bit of Lisa in the rubons on placed randomly on the page. Thanks to Donna's girls for helping me out with the statement is read to the award recipients. Getting the award was extra special for Mitch as his statement was read by Seb, an amazing student at the school who Mitch has become close friends with during their SEP sessions on a Wednesday. Also used a little bit of A Lil' Somethin' awesomeness on the layout with the kite (just quietly, I think I am in love). 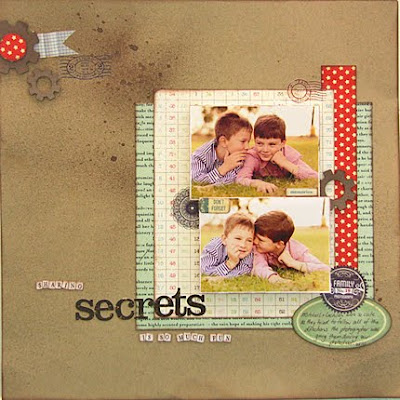 Finally, I can show this layout. I posted a sneak weeks ago while we were still on holidays but have only just got around to showing you now. This was my application for a DT spot with Stuck! Sketches. Unfortunately I didn't make the team but didn't really expect to as this was only the second time I have ever applied to be on a DT. Can't be too disappointed though as it is one more page for the albums that would not have been there if I didn't apply in the first place - gotta find the silver lining in every cloud - now there are 8 words I need to start living by.
Thanks for an awesome weekend ladies. Let's hope it isn't too long before our next get together.

Have a great week everyone.

well.. I must be the stayer... Lauren has been driven home..(good boy Luke!) Lisa has gone to bed *piker* and you Mrs Hemmings might be excused tomorrow *sigh*
and I am still scrappppping!
love you honey mwah! xxoo

I love the layouts, did you glimmer mist that pages and paint the, they cam out great thanks for sharing...

You did a great job on these layouts! What great boys you have! :-)

Seriously, it wasn't me!!! LOL

Was great to catch up and scrap with you. Love all these layouts. :)

Gorgeous Sarah - Id be happy to scrap at your speed and churn out these awesome pieces - Love ya babe!!!