We have had some sadness in the family with the passing of one of Dad's brothers at the age of 71 after losing his fight with cancer. He passed away a few days before school ended for the year and leaves behind my aunty, 6 cousins and all their children - not to mention his own brothers and sisters. But as sad as this time has been, at least now Uncle Michael is now at peace and free from suffering.

I have to say I am sooooooooooo proud of my Dad. His commitment and closeness to his family - as in his own siblings (and their partners and offspring) as well as his own wife and children - is something that is amazing. My dad is the sort of person who is there no matter what is going on in his own life and he is one of those people who goes about things quietly and never expects anything in return, and especially never expects to be thanked - he just does it because that is the type of guy he is. Even though he is the baby of his family, it always seems that everything falls to Dad and everyone comes to him in times of crisis and sadness. As things have turned out, Dad and Mum were privileged to spend quite a bit of time with Uncle Michael in his last few months - first a 6 week stint in August/September when they were touring the state in their caravan and lastly a week long stint during Uncle Michael's final days.

Even though Uncle Michael's ultimate death was (and still is) quite sad, Dad counts himself very fortunate to have been there. Not once did my aunty or cousins ever exclude Mum and Dad, in fact it was the exact opposite - they called him their rock. That is just the kind of man he is - he will be there for anyone no matter what. But what makes me most proud is the way he stood up and represented his brothers and sisters in presenting part of the euology for Uncle Michael. While Dad is a very sociable person (and i mean VERY sociable lol), he detests public speaking with a passion but when one of his great-neices asked him if he would help her present the Euology, Dad put his own discomfort aside and did it. And what an amazing job he did - I have never been so proud of him in my life. What he had to say was perfect. I can only hope that one day, I can do for my family what my father has done for his - he has set the bar pretty high so I hope I can reach his lofty standards.

So Dad, although you will never see this, this is for you:

I just wanted to say I love you, I am proud of you and I am thankful to have a man like you in my life. 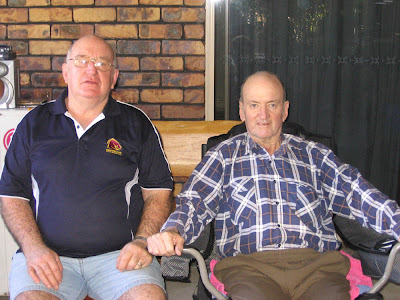 Miss this is one of the most beautiful things I have read...soo many goosebumps..you are the best daughter..so honoured to call you a Beastie...mwah